David Beckham's second born son, Romeo, is playing in the MLS NEXT Pro, a sort of professional minor league started this year by Major League Soccer (MLS). He plays for the Inter Miami II team, and he scored his first ever professional goal at 19-years-old against Orlando City B.

And he did it in spectacular, Beckham fashion!

In a free kick, which his father scored on MANY times in his career, the younger Beckham lined up just outside of the 18-yard box, on the left. He proceeded to take the kick, sending his shot over the Orlando City B wall, curving it down past the keeper, and into the bottom left corner.

This pushed Miami's comeback lead to 3-1, after they trailed 0-1.

Here's a couple of different angles of the goal:

In the replay, the announcer quips, "I think we've seen this before." That could be the understatement of the year, as David Beckham was so famous for scoring in this fashion, that there was a 2002 movie starring Keira Knightley aptly titled Bend it Like Beckham.

After the match, David Beckham took to Instagram to let his son, and the whole world know how proud he was of him. Romeo responded, letting his father know that his first professional goal, in true Beckham fashion, was for him. 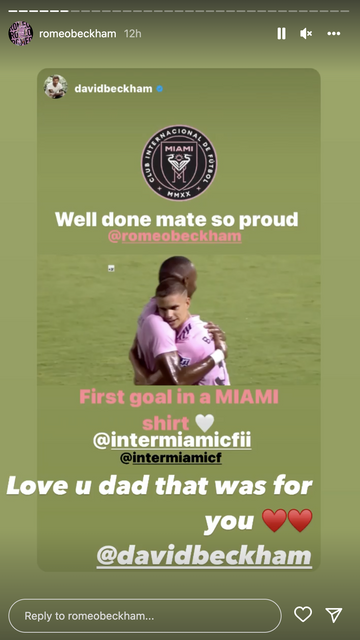 To make it just THAT much cooler, Inter Miami's ownership includes...you guessed it, David Beckham. So the younger Beckham's first professional goal was scored while playing for his dad's team! I'm certain this won't be the last time we see Romeo find the back of the net, or the side, for that matter.

Sometimes images are the best way to honor the figures we've lost. When tragedy swiftly reminds us that sports are far from the most consequential thing in life, we can still look back on an athlete's winning moment that felt larger than life, remaining grateful for their sacrifice on the court and bringing joy to millions.
Read on to explore the full collection of 50 images Stacker compiled showcasing various iconic winning moments in sports history. Covering achievements from a multitude of sports, these images represent stunning personal achievements, team championships, and athletic perseverance.
Source: Romeo Beckham Can Indeed Bend It Like His Dad [Watch]
Filed Under: david beckham, MLS, romeo beckham
Categories: National Sports
Comments
Leave A Comment
Have You Heard the Story About When Shaquille O’Neal Found David Beckham’s Wallet?
Valentine’s Day 2022: See How Halsey, Britney Spears and More Stars Celebrated
25 Celebrities Who Got Starstruck by Other Famous People
Victoria and David Beckham Send Messages to the Spice Girls on Opening Night of Their Tour
Victoria Beckham Confronts David Beckham Divorce Rumors
Ed Sheeran to Join the Carpool Karaoke Club
Why Is David Beckham Doing Push-Ups in His Underwear on Top of a Piano?
David Beckham Is People’s New Sexiest Man Alive
David Beckham Kicks Soccer Balls on the Beach – Real or Fake? (VIDEO)